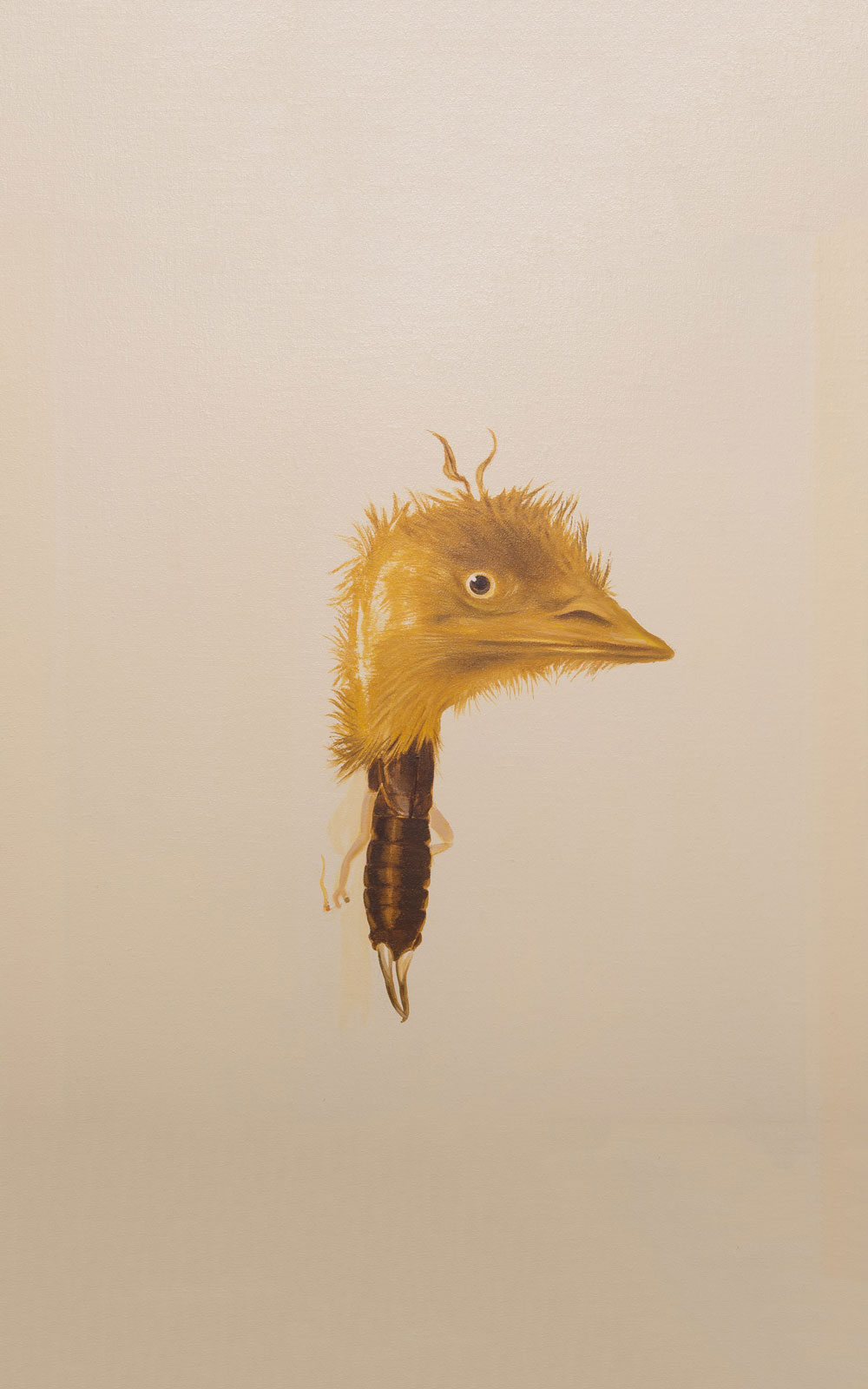 Back to Life – Re-imagining

Back to Life celebrates the diversity of all living things and traces the perilous nature of the near invisible world of insects. Through re-imagining, research and factual evidence, 26 paintings interpret specific insects combining the native fauna of Australia (with the exception of a Mexican hairless dog, an ancient spider and some introduced species) with near extinct insects (and not always endangered) from around the Onkaparinga River and far beyond. The paintings reflect ‘tiny lives lost’, informing the reason for extinction in relation to the ecology of the land and river and the influences that have contributed to the decline in species.

“People thought insects were passive and just got accidentally blown about,” said researcher Jason W. Chapman of the University of Exeter to Scientific American last year. “That is absolutely not the case. Insects make active choices about when to migrate and how to use the winds, often moving fast and over long distances, in beneficial directions.”

We know and revere the migration of fauna: the red crabs of Christmas island, the leatherback turtles of the pacific, the humpback whales that traverse quests of ocean from the northwest Kimberley to the Antarctic. Yet so little is known, or even considered, about the migratory dance of our smaller kin: insects, those trillions of creatures that shift and pulse out of sight, mind and even imagination, roaming in vast clusters each seasonal turn to glue together our delicate ecosystems. What of their fate, these tiny lives? How little we know. How scant the research and attention we give to the living diminutive. The holes in our knowledge. How might we think about these trillions of species that defy our attention, whether in flight still, or with tiny wings at rest.

Back to Life is a playful look at the lives of these largely unknown species, an attempt to bring to people’s attention to the millions of tiny lives lost. By using what is known (fauna) as an expositive device, Back to Life brings to the fore the endangered, extinct and rare creatures that we rarely consider. The exhibition comprises 26 pieces, an A-Z collection with a hybrid fauna-insect accompanying each letter. A departure from Kennedy’s primary mediums of soft sculpture, painting and collage, Back to Life thrives on a marked divergence: drawings, painted later in dark mustard and yellow tones yet thoroughly and deeply illustrative in their function.

A Alpaca-Ant, 2018, oil on linen, 40 x 40 cm. Alpaca (Vicugna pacos). NOT ENDANGERED. Although alpacas are not endangered, there is some concern over their genetic makeup becoming endangered due to interbreeding with llamas. Dinosaur ant (Nothomyrmecia macrops). CRITICALLY ENDANGERED. Considered a 'living fossil', the dinosaur ant may have finally met its match in climate change.

E Emu-Earwig, 2018, oil on linen, 40 x 40 cm. King Island Emu (Dromaius ater). EXTINCT. The extinction of the formerly numerous King Island Emu is believed to have been caused by excessive hunting for food by early seal-hunters. Common brown earwig (Labidura truncata). NOT ENDANGERED. Similar to european earwigs but are reddish-brown with darker abdomens and pincers. Native earwigs are polyphagous; they generally do not damage plants but can potentially be pests.

I Ibis-Ichneumon wasp, 2018, oil on linen, 40 x 40 cm. Australian white ibis (Threkiornis moluccus). NOT ENDANGERED. This highly adaptable bird has managed to survivie the consistent threats and changes to its natural wetland habitat, even scavenging for food on the periphery of cities. Ichneumon wasp (Ichneumonidae). NOT ENDANGERED. black and white-striped ichneumon wasp: is a good bug to have in the garden , but people's fear of wasps sees many of this species killed. It is a stingless wasp.

R Rat-Roundworm, 2018, oil on linen, 40 x 40 cm. Water rat-Rakali (Hydromys chrysogaster). RARE. Extensive native vegetation clearance, habitat fragmentation, competition by both feral and overabundant native herbivores, predation by feral cats and the European Red Fox continue to negatively impact this species. Roundworm (ascaris lumbricoides). NOT ENDANGERED. Roundworms or nematodes are the most abundant and ubiquitous multicellular organisms on earth. Between 100,000 and 1,000,000 are believed to exist. Only a small percentage of Australia's species are currently known, with 1000 having been named.

V Vixen-Varroa, 2018, oil on linen, 40 x 40 cm. The Vixen (female red fox) (Vulpes, vulpes. NOT ENDANGERED. The red fox has become a serious conservation problem in Australia, with current estimates exceeding 6.2 million. Varroa mite (Varroa destructor). NOT ENDANGERED. The small mite will attach to a foraging worker bee and catch a ride into the hive. Once there, it will burrow into a cell containing a larva and lay its eggs on it. When the larva pupates, the eggs will hatch and the be will leave the cell, taking parasites with it. The mites feed on the bee's blood weakening its immune system and transmitting diseases such as Deformed Wing Virus which leaves the bee with short and useless wings.

W Wombat-Wasp, 2018, oil on linen, 40 x 40 cm. Northern hairy-nosed wombat (Lasiorhinus krefftii). ENDANGERED-PROTECTED. As hairy-nosed wombats never venture far from their burrows to feed, over grazing and competition for pasture especially during drought, contributes heavily to the decline of this particularly vulnerable species. Paper wasp (Polistes humilis). NOT ENDANGERED. The native paper wasp is less aggresive than the introduced European wasp. the nest, made of paper is easily spotted hanging out in the open.